German Chamomile: About the Herb & Its Benefits for Skin 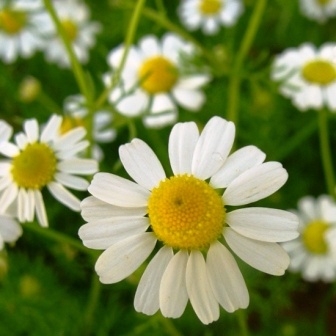 Chamomile is a beautiful herb often seen meticulously planted as a ground cover in gardens. You are more likely to see a growing chamomile that is usually used in making tea, in someone’s balcony garden. In addition to its tranquilizing qualities, these chamomiles are visually appealing too.

Chamomile has been popular medicinal herb in Europe and Northern Africa since long. Even the word ‘chamomile’ finds its roots in the Greek language. “chamos” (ground) and melos (apple) signifies that the plant grows lower to the ground and having the aroma like that of an apple. If you look back at the history of German Chamomile then you will know that, all over the world, especially in Europe, the chamomile has been used as a medicinal herb. In addition to that, German Chamomile is also included in the pharmacopoeias of 26 countries. Egyptians for fever, and then the usage of the herb spread like a wildfire all over the world.

All over the world, scientists have started to believe in this herb’s incredible anti-inflammatory, antispasmodic, antimicrobial and mild sedative properties.

Such properties make German Chamomile useful in various medical conditions such as travel sickness, stuffy nose, attention deficit-hyperactivity disorder, fibromyalgia, restlessness, nervous diarrhea, and insomnia. Even if you suffer from any sort of digestive related disorders, menstrual cramps or stomach ulcers, German Chamomile should be your rescue.

This magic herb has a lot of benefits when used externally on skin as well. For skin related disorders, it is advisable to topically apply German Chamomile directly to the skin.

German Chamomile is known to heal numerous skin conditions with little or no known side-effects. It’s available in Oil extract and topical cream forms for using on skin.

The plant contains 0.24% – 1.9% volatile oil that helps in reducing inflammation and act as a mild antibacterial. This particular essential oil also contains bisabolol oxides, farnesene and spiro-ether that have anti-inflammatory properties.

Whether used in either form, German Chamomile is extremely useful for treating sensitive skin conditions such as reducing redness of the skin, reducing the appearances of broken capillaries, helping to calm skin acne, rashes, stings and burns, and for treating dry skin conditions. In addition to that, it also aids in preventing and fighting premature signs of aging.

If you are a Rosacea sufferer, then opt for a cream that uses German Chamomile extract. It will have vasoconstrictor benefits i.e. it helps in reducing redness and flaring of the skin.

Although uncommon, but reports of allergic reactions in people who have been consuming or topically applying oil extract have been noticed. For more go to https://nccih.nih.gov/health/chamomile/ataglance.htm

Raisa is a beauty & lifestyle blogger who writes barefooted, goes crazy over florals, pearls, laces, books and glitters. She is one coffee addict, she even baby talks to her dogs.

Latest posts by Raisa (see all)