Psoriasis is an autoimmune disease that has infection on the skin. When the immune system sends faulty signals which speed up the growth cycle of skin cells, it’s when psoriasis occurs. Currently, the exact trigger of the disease is not yet discovered. At least 10% of general population may have a predisposition to psoriasis since they contain genes inherited from their ancient families. This does not actually means that a person containing these genes is infected. Psoriasis shows up when some of the triggers are involved. It’s considered that only 2-3% of the infected population develops this disease but if only he or she contains the genes that cause it and exposed to triggers of psoriasis. However, the external factors are not universal that means they may not affect other people. You can’t be infected by psoriasis if you only touch an infected person. 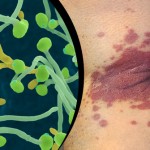 There are three main factors that trigger psoriasis.

Skin injury is the other main trigger of psoriasis. The injured area in the body i.e. the skin are common areas were psoriasis occur. This kind of phenomenon is called Koebner phenomenon. Koebner phenomenon causes are triggered by scratches, sunburns, vaccination, insect bite or even strep throat.

Psoriasis attack can also be triggered by some of the medication. These include;

There are some other unproven factors that trigger psoriasis. They include;

If you have psoriasis, first thing to do is to avoid these triggers knowing your triggers may mean you can avoid a flare-up of psoriasis. Live a healthy and a happy life.

Author
Clair has worked in Pharma industry for long. Here she is blogging about various beauty and skin care issues. When she is not blogging she is building sandcastles with her daughter or probably is just hanging out with friends.

Latest posts by Clair (see all)