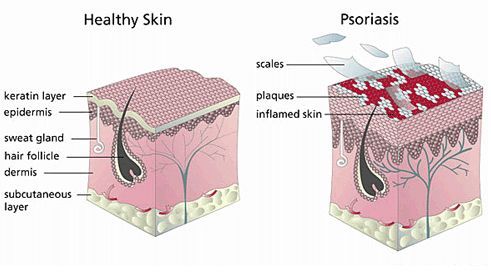 Psoriasis is a skin condition that occurs when there is a certain immune system malfunction-The white t-cells are stimulated in excess, making the skin to reproduce at an abnormally fast rate. As a result, red patches, peeling skin, itching and pain occurs. The most commonly affected areas are: elbows, arms, feet, certain parts of the face such as eyebrows and scalp. Psoriasis can also appear in genitals, ears and almost everywhere on the body and face.

Although the disorder has bit of unpredictable behavior, studies have found that it tends to get worse during extreme environmental conditions (high heat, freezing cold), stress levels and other factors such as nutrition and taking medicines.

Currently there is no cure for Psoriasis, but depending on the type and severity of symptoms there are many different options available.

The most common treatment for Psoriasis is the use of chemical and natural based creams which are applied topically on the skin, to decrease and keep the outer symptoms (red, peeled, itching skin) under control. Topical creams creams are used for moisturizing and calming the skin, as well and encourage surface skin renewal.

Other treatment options include ultraviolet light therapy and medication for more severe cases. For best results, a combination of these methods is advised.

If you suspect that you may have psoriasis, avoid self-treating yourself and consult with a doctor or a skin expert who will diagnose your condition accurately and offer the most suitable treatment for you.

If you already have a diagnosis of Psoriasis, you might benefit from natural based products that don’t irritate the skin, such as Revitol’s Psorasis Cream.